Polynesian civilization boasts a very rich cultural heritage. Its rites, language and dialects, but also the organization of its society have been deeply altered by colonization and Christianization. However, the mainly oral transmission in the islands has allowed to preserve the heritage of the elders and consequently allows the youngest to rediscover their ancestral culture in their original places. Let’s explore together some of the most important cultural places in French Polynesia. It is on these sites that you will find a certain authenticity.

1. The Taputapuatea Marae in Raiatea: The Origins of Polynesia 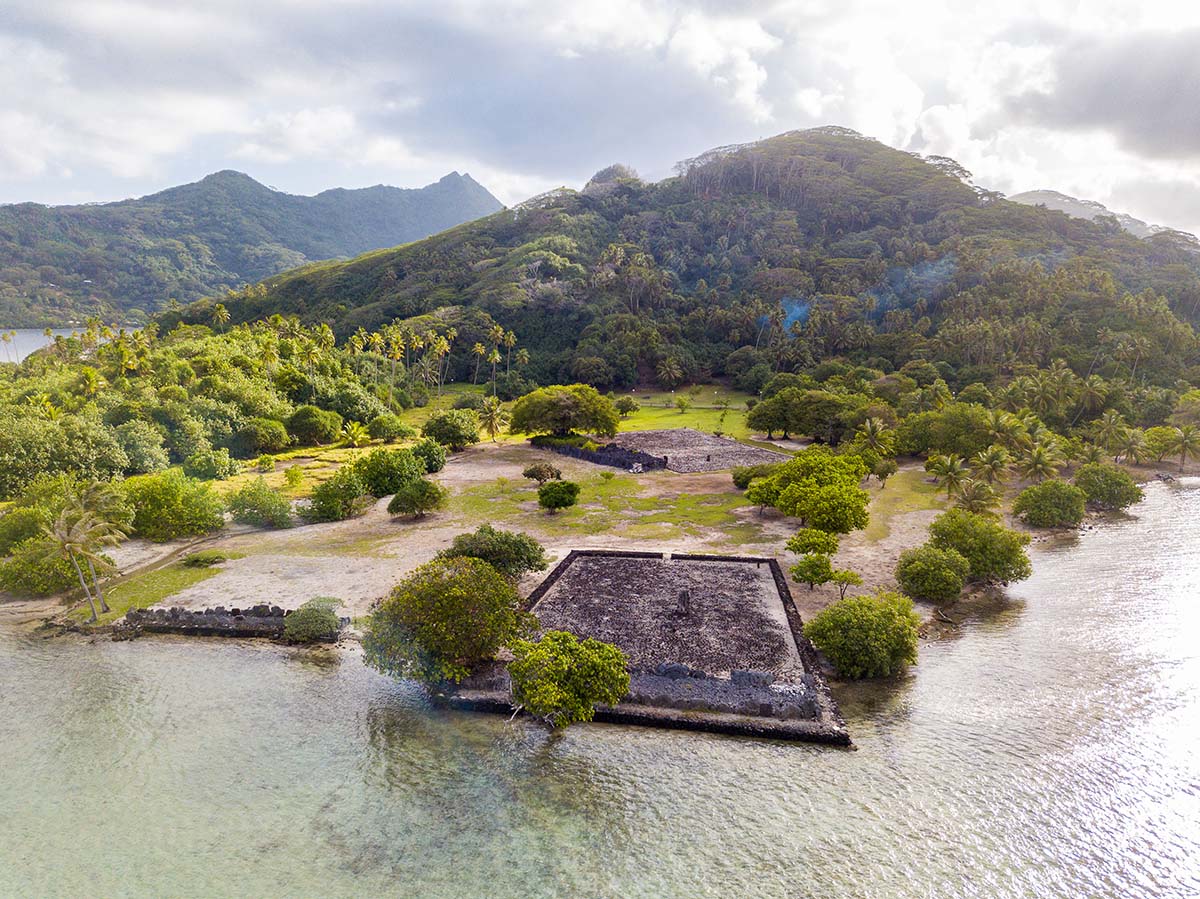 Of all the cultural places in French Polynesia, the Taputapuatea marae is the most important. A visit on the spot is essential.

First of all, it is a historical site that is over a thousand years old. It was here that kings were crowned and political and military alliances were celebrated. Long neglected and almost forgotten, the marae has been very well restored and it now impresses by its gigantic dimensions. History is engraved in the original stone and coral.

Then, the Taputapuatea marae was a religious center of the first order. To visit it is to discover the ancient legends that Polynesians have passed down from generation to generation. In the company of a local guide, you will learn more about Polynesian religion, the worship of the war god Oro, and perhaps even the mana of the islands.

Finally, the aura of the Taputapuatea marae covers the entire Polynesian triangle linking New Zealand to Easter Island and Hawaii. Its international dimension gives it a pan-Polynesian essence, and places it at the origins of the Polynesian Nation and its extended culture.

2. The Road from Maeva to Faie in Huahine: Legends and Traditions 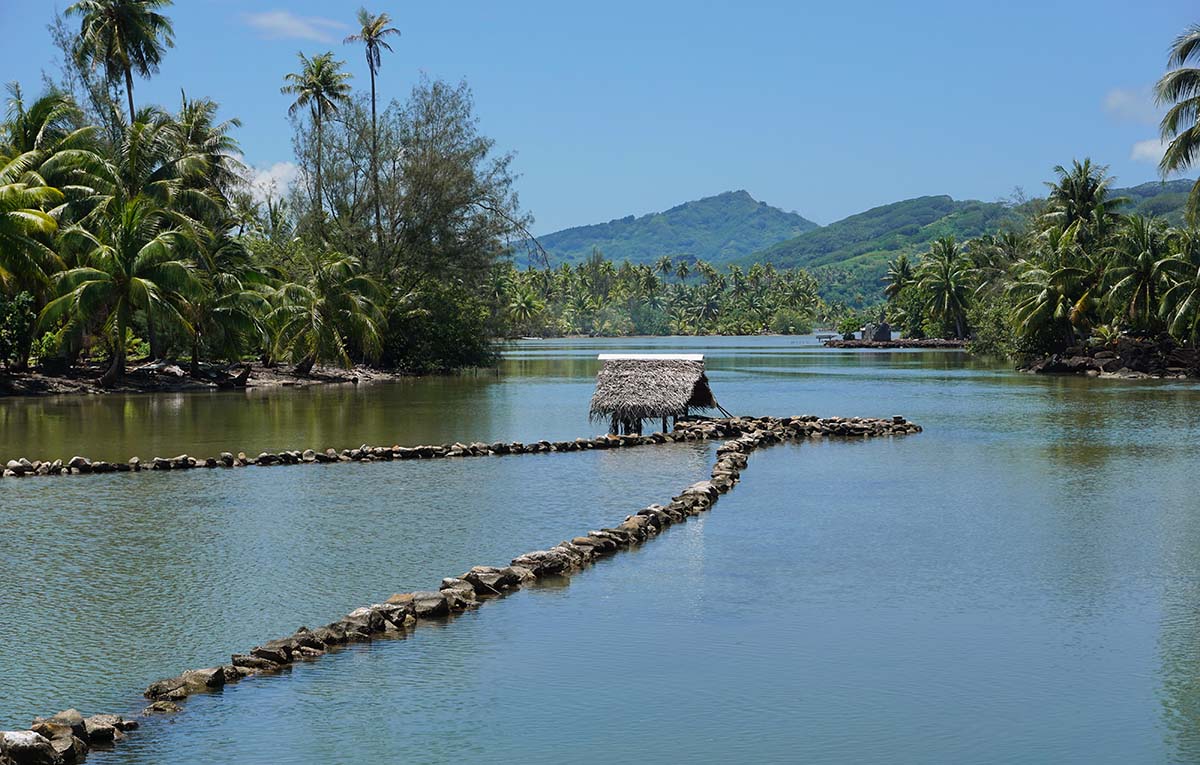 The search for authenticity can lead in French Polynesia to discover unlikely cultural places. This is notably the case on the island of Huahine. Time seems to have stopped there. From Lake Fauna Nui, explore the vestiges of ancient Polynesian civilization and the marks of traditional skills.

Discover the archeological sites in free access, the marae of Maeva, dating from the pre-European era. There are many legends in the coral rock. For information, a small museum Fare Potee evokes the daily life of the ancient inhabitants, with navigation as the main theme.

As you continue your journey towards Maroe Bay, you will see huge fish traps. This traditional fishing technique still exists and gives the place a deliciously old-fashioned atmosphere. You will finally reach the small village of Faie to discover the blue-eyed eels. Here again, it is all about transmission and heritage, the memory of the elders and the beliefs of yesteryear.

3. The Valley of the Kings in Bora Bora: The Glorious Past of the island 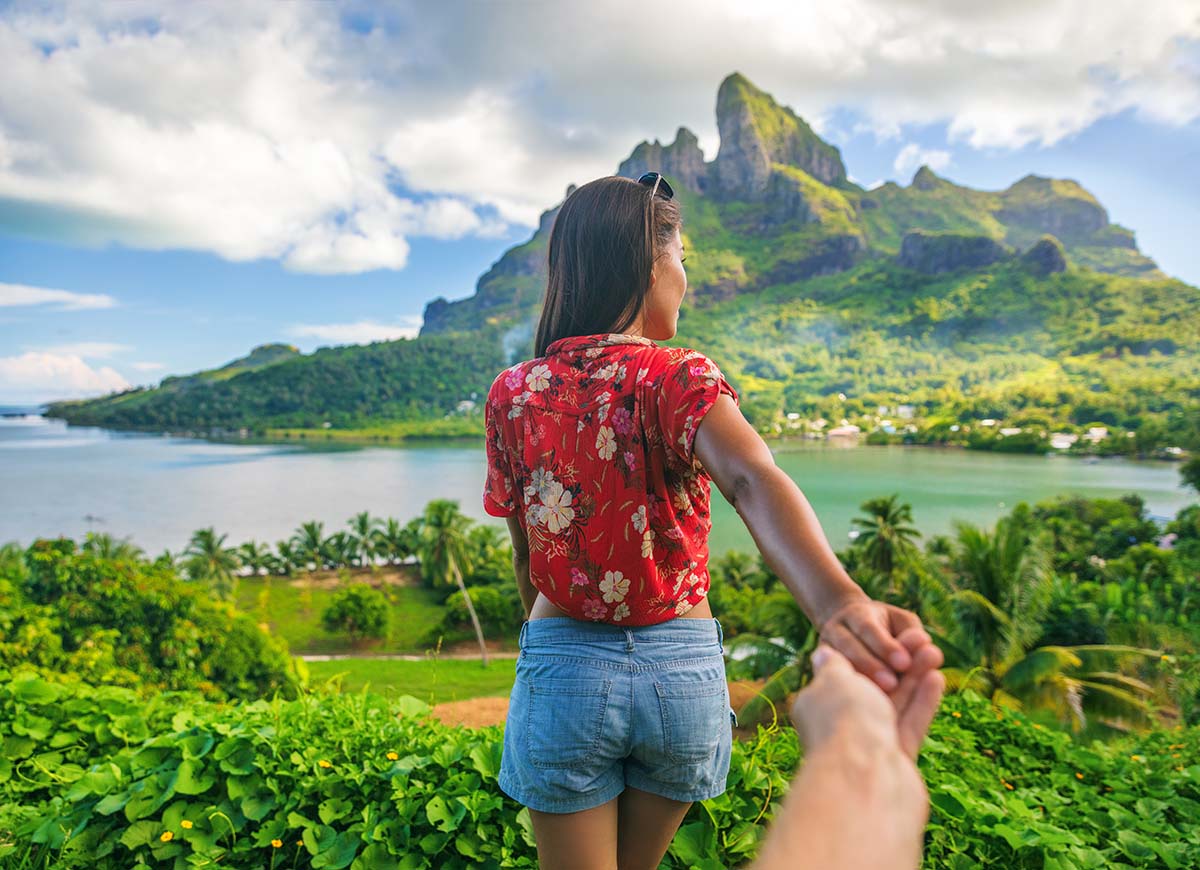 Bora Bora has the reputation of a romantic island with a dazzling beauty. It certainly is. In pre-European times, the island owed its fame in the Pacific to the ferocity of its warriors. Its power made it a key player in diplomacy and war, and its kings were among the most feared.

The main island hides many mysteries, which you will have to discover by visiting the inner lands. The valley of the kings takes you to the sacred places, where men and gods belong to the same legends. It is already the possibility to contemplate the remains of ancient sacred places: the marae, around which the daily life was organized.

Through the forests and fruit gardens, the journey from the village of Faanui becomes an initiation walk until the apotheosis: a gigantic Pacific banyan tree. The fantastic tree of about ten meters impresses. The bones and souls of the ancient kings of Bora Bora lie between its roots above ground.

4. Hina’s Bell in Tikehau: The Girl and the Sea 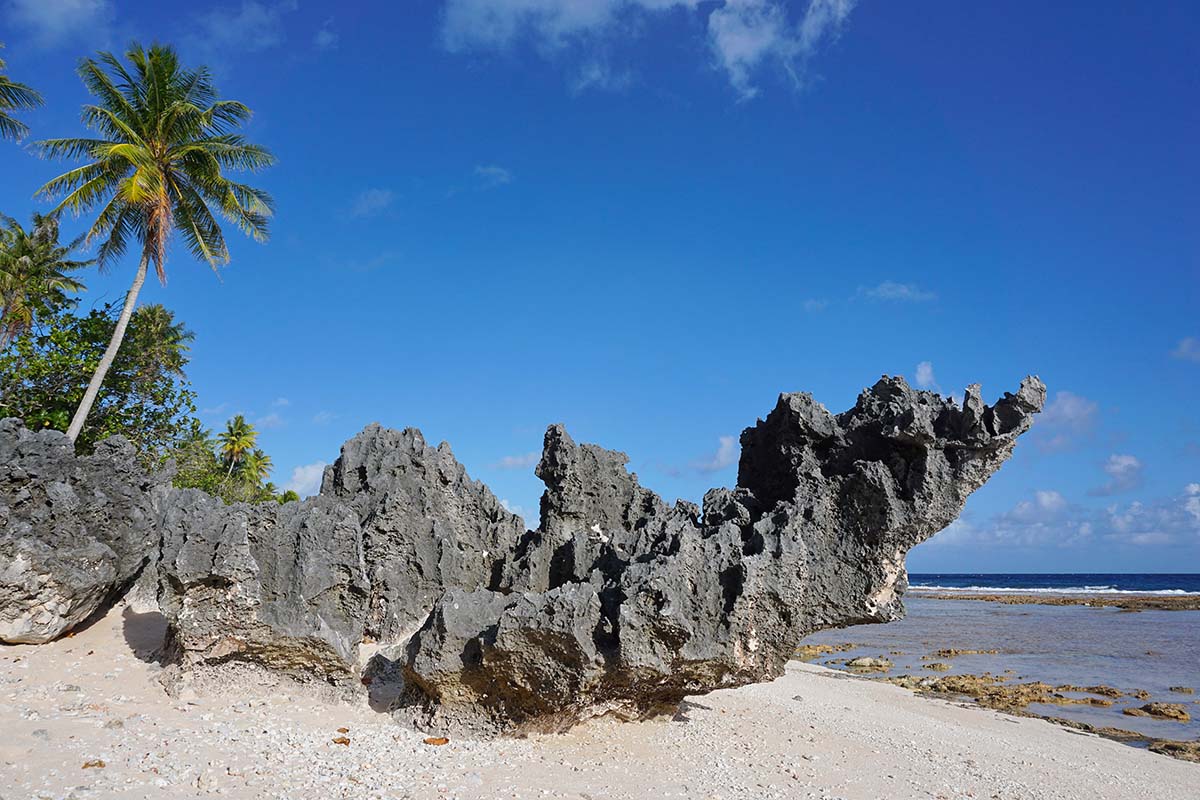 The Tuamotu archipelago also has its own legends and poetic tales. Go to the atoll of Tikehau at the western end of the main motu. On an isolated beach cut off from the world, huge fossilized rocks millions of years old rise up to the sky, disturbing and majestic.

The site is surrounded by a beautiful story. A young girl named Hina, who became a princess, used to go to this place to take a bath, protected from prying eyes. She would sit in a pool and hit a natural bell. The waters of the lagoon would then fill the basin. A second blow on the bell, and the bath was over, the waters were withdrawing.

Fishermen and then surfers took this legend to their advantage to ensure miraculous fishing or first-class waves. If the bell disapeared, the basin is still visible. As for the site itself, it exudes a natural power that will not leave you unmoved.

5. The Arahurahu Marae in Tahiti: Polynesia Offers Itself to You 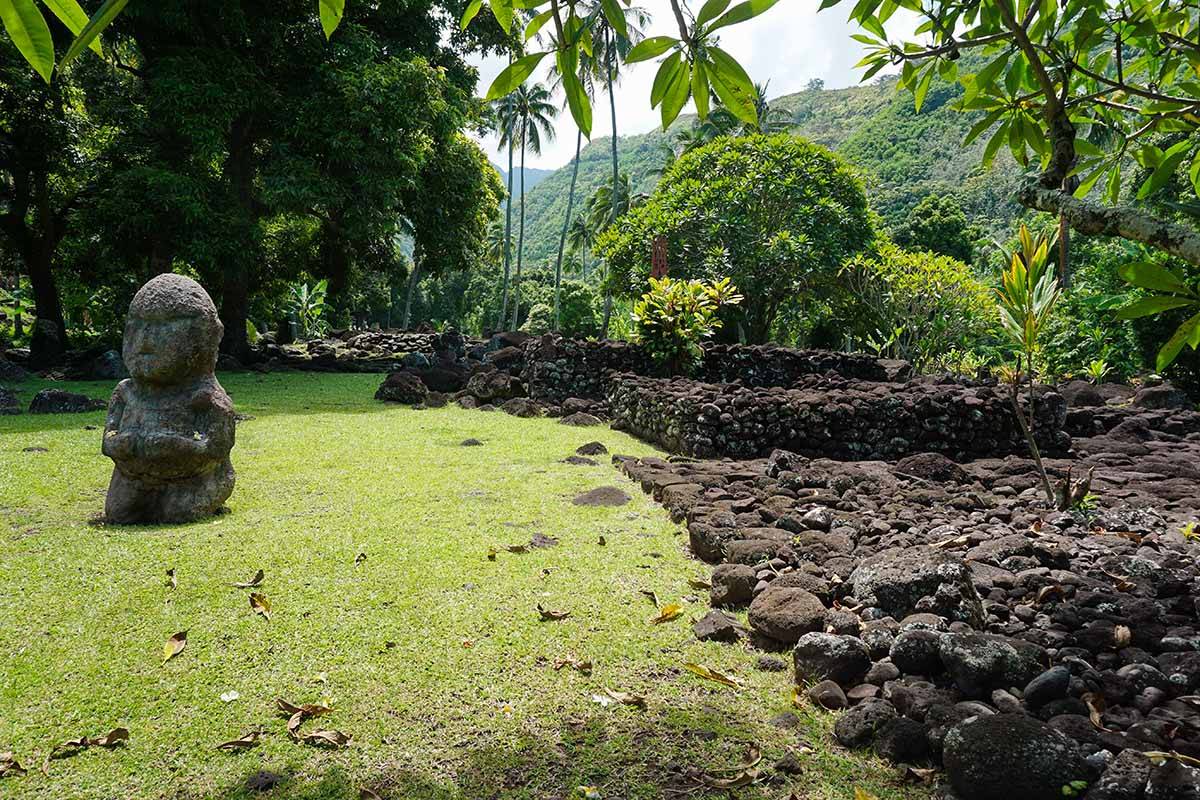 Without a doubt one of the most famous cultural sites in French Polynesia, the Arahurahu marae is also one of the most impressive. Thanks to the restoration work, the site is now of very good quality. You will find it in Paea on the west coast of the main island.

In addition to the legends that surround it and the mystical rites that took place there, the site also owes its new notoriety to an excellent presentation by the public authorities, notably during official and festive ceremonies. During the months of July and August, as part of the Heiva, several performances of traditional dances are organized there. But this folklore is above all the expression of a recognition to which the Polynesian people aspire: that of a heritage and a culture to preserve.

This is why we strongly recommend that you attend a ceremony at the Arahurahu marae. To better plan your program, discover when to go to French Polynesia. In case you don’t have the opportunity, choose to visit the site with a guide who will make the experience unforgettable.

Discover the Legends of French Polynesia

There are many cultural places in French Polynesia. All you have to do is discover them. However, don’t forget that today’s Polynesian society lives with its time and does not turn its back on modernity. The issue is above all one of identity: to value the Polynesian nation and its customs as an affirmation of self. In short, it is a question of recreating a link and not living in the past.

Tahiti and her islands are also natural wonders that will make your stay unforgettable. Discover the best hikes in French Polynesia and the most incredible dives. Contact us today to start planning your trip to the South Pacific Islands.