French Polynesia is a particularly safe tropical destination. Indeed, the islands are free of large predators, poisonous snakes or deadly spiders. The same cannot be said for the aquatic fauna. Discover the fascinating daily life of sharks in French Polynesia and learn how to observe them.

Living With Sharks In French Polynesia

There are no less than twenty species of sharks in French Polynesia. The ones you will meet evolve in three distinct environments: lagoons, oceanic passes and the external drop offs of the islands.

Many myths surround the figure of the shark in Polynesia. The shark can be a companion and a guide during sea trips, the reincarnation of the elders or the instrument of the gods’ wrath. For centuries, Polynesian peoples have learned to live with it, adopting it during initiation rites or as a protective totem for the clan. The shark thus occupies an important place in the cultural heritage.

Sharks in French Polynesia also play an essential role in the natural balance. They are the elementary links in the food chain, regulating the proliferation of species and cleaning the oceans. This is a major environmental issue. Unfortunately, over-fishing, the development of tourism and the very negative image imported from the Western world have strongly damaged the shark’s previously taboo status.

To preserve the survival of the species and thus guarantee a balanced marine ecosystem, French Polynesia banned the fishing, mutilation and killing of sharks in 2006. This protection measure is as much environmental as cultural. People and sharks in French Polynesia must live side by side.

The blacktip shark is found in all the Society Islands and in the Tuamotus. It can reach up to 1.5 m long and is harmless. It will accompany you during your swims or your kayak trips. Another resident of the lagoons, the lemon shark measures more than 2 meters. Although impressive, it is also harmless. You will meet it in Moorea and Bora Bora.

Reef sharks are best seen in the Tuamotus. Grey or white tip sharks can be observed in the very fishy passes at Tikehau, Rangiroa and Fakarava.

Finally, divers can meet two more solitary species. Between January and March, the Great Hammerhead shark appears in the Tiputa pass in Rangiroa. Its size can reach 6 meters long. But above all, in the Tuamotus as well as in Tahiti itself, you can observe the tiger shark, an imposing predator from which it is better to keep away.

Are There Shark Attacks? 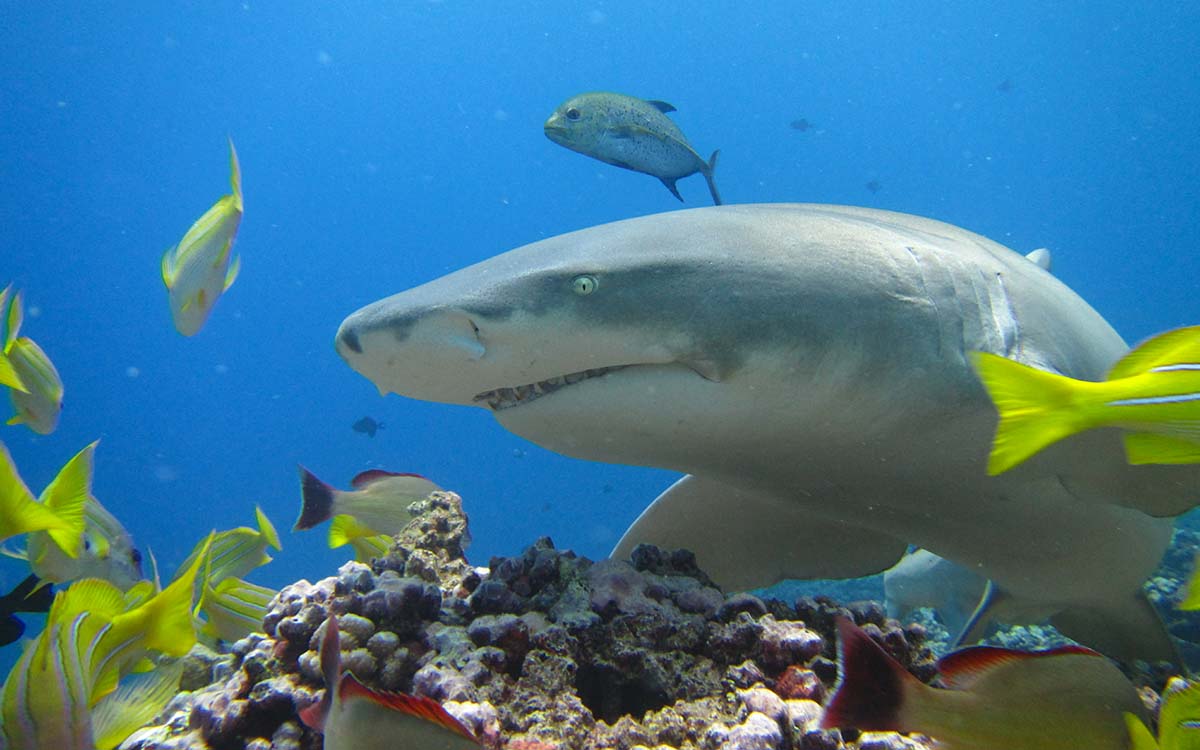 The probability of being attacked by a shark in Polynesia is very low. Most of the time, the shark will lose interest or become frightened and will quickly move away. However, attacks can occur. If we should not give in to the anti-shark hysteria conveyed by some media, it is also wrong to think that sharks in French Polynesia are totally harmless. They are wild predators that cannot be domesticated.

The rare attacks recorded in recent years are partly related to the unpredictable nature of certain species and their inquisitive behavior. The injuries can be more or less serious. The other and main reason for these attacks is found in irresponsible behavior, where stupidity and disregard for safety rules come together.

Since 2017, French Polynesia has banned shark feeding, a practice that consists of luring sharks with bait. Yet some tourism stakeholders are reluctant to follow the ban, citing cultural as well as economic reasons. The consequences are obviously a disruption of the animal’s behavior and the increased risk of an attack. Fortunately, the phenomenon remains minor.

First of all, you must respect the animal and its environment. Observation is essential. Let the sharks swim quietly and do not try to interact with them. This also applies to children. Of course, do not excite the sharks with food.

Secondly, it is essential to follow the recommendations of snorkeling and diving professionals. They know the environment and are familiar with sharks. Stay tuned and don’t do anything without their approval.

Finally, you must accept the luck factor. While diving or on a boat trip in the lagoon, you may not encounter as many sharks as you had hoped. Do not be disappointed! These are the hazards of an eco-responsible tourism that combines sustainable development with the safety of visitors. 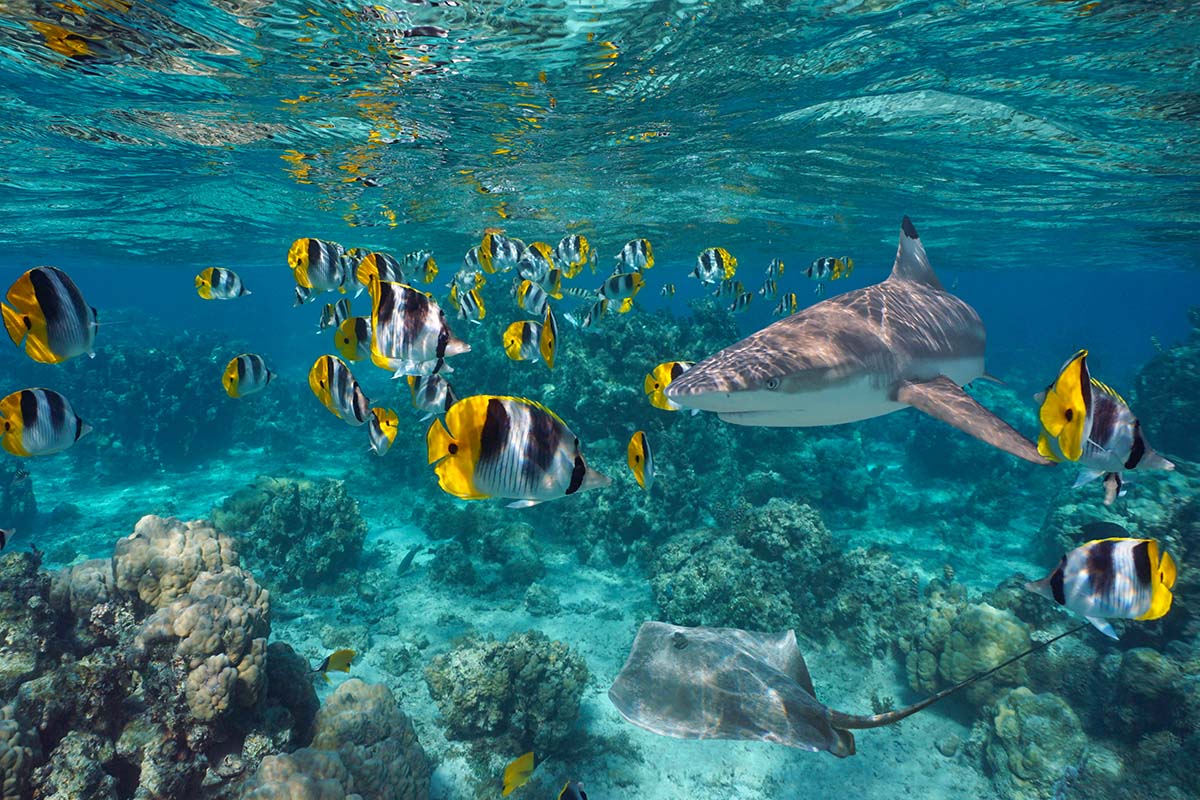 Some people are afraid to swim next to sharks. Indeed, the collective imagination has created a tenacious myth from which it is difficult to break away. A time of adaptation is necessary while the stay in the islands passes too quickly.

Put all the chances on your side and use the services of a professional guide as soon as you arrive. With his contact, you will learn to know the behavior of sharks and will gain confidence to repeat the experience in all serenity.

Nevertheless, don’t forget that you are not in French Polynesia to learn to overcome your fears. No one will force you to go in the water: observation from a boat is also possible.

Sites Where To Meet Sharks in French Polynesia

To observe sharks, you have the choice between snorkeling and diving. Both approaches offer different and unforgettable sensations. We can recommend you several sites.

For snorkeling, go to the west coast of Moorea to meet the black tip sharks. Without even moving too far from the shore, you will gradually see them surrounding you. You can even try the experience aboard a traditional pirogue! Another exceptional site: the Blue Lagoon on Rangiroa atoll in the Tuamotus archipelago. A day trip takes you to the end of the world to discover a black tip shark nursery.

For diving, you can see lemon sharks in Bora Bora; blacktip sharks in Moorea and tiger sharks in Tahiti. Experienced divers should not miss the Tuamotus for drift dives at Rangiroa, Tikehau and especially Fakarava. On these sites, the density of sharks has never been so high: you will literally see a wall of sharks!

Sharks are part of the Polynesian cultural heritage. But beyond their identity issues, their presence also testifies to the richness of aquatic life in Polynesia. As such, going to meet them seems an obvious choice. 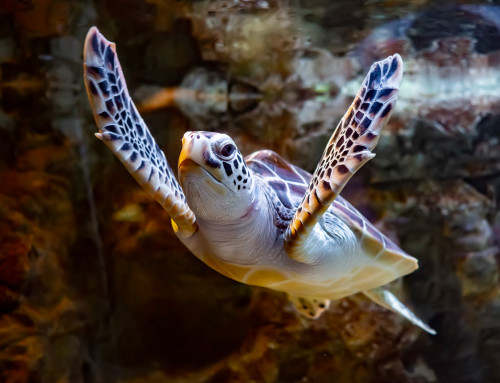 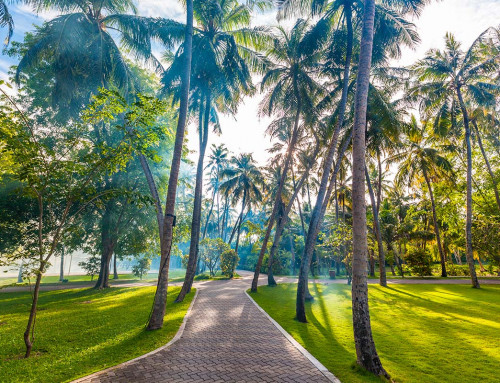 Pensions in French Polynesia: In touch with the locals 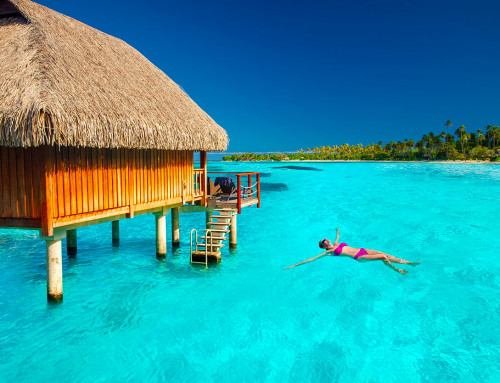